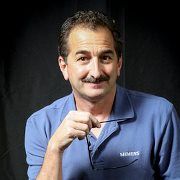 Nick Hunseder, Vice President of the Board of The Clarkdale Foundation

Did you know that when you buy your tickets to the Verde Valley Wine Festival, a portion of your money benefits a Clarkdale-based nonprofit organization? This year, the Festival has partnered with two nonprofits: the Clarkdale Foundation and the Arizona Vignerons Alliance.

You may not be aware of the Clarkdale Foundation, but residents of the town are certainly familiar with some of the community events and projects funded by the organization. Examples include:

We sat down with Nick Hunseder, Vice President of the Board of the Clarkdale Foundation, to find out more about the nonprofit’s work in the community. Nick and his wife, Debbie, moved to Clarkdale in 2004 after visiting the area for almost 20 years. He joined the Clarkdale Foundation in November 2006 and was elected Treasurer. In addition to his role with the Foundation, he also is the webmaster for a Greyhound Rescue group (gpa-az.com) and runs his own business, Nick of Time Productions, LLC where he does web design, graphics, and computer consulting.

Q. What is your role at the Clarkdale Foundation?

Currently, I am the vice president. I have served as treasurer, secretary, and president since I joined in 2006.

Q. How did you become involved with the organization?

I wanted to be involved with an organization that benefited the town. I was asked if I was interested in becoming a member of the Clarkdale Foundation, and it was a match.

Q. Can you tell me a little more about how the Clarkdale Foundation started, its mission, etc.?

The Foundation was formed in 1998 as an Arizona Corporation. Of the original members, Henri Prud’homme, is President. We’re an IRS approved, 501(c)3 organization.

The Clarkdale Foundation began as an outgrowth of Clarkdale’s Downtown Revitalization Program. Our goal is to promote the redevelopment and social welfare of Clarkdale. The main way we accomplish that is by helping fund various projects in the area. We do that thanks to fiscal donations to the Foundation by individuals and businesses.

Q. Why is community involvement so important?

The best way to make things happen is by getting the people in the community to be committed to projects that enhance the community. Volunteering is a great way to learn what’s going on, meet community members, and take an active role in positive changes for our town.

Q. What does the Foundation hope to do with the money raised from the Wine Festival? Are there any initiatives you’re working on that you hope will get a “boost” from the Festival’s fundraising efforts?

We plan to provide funds for scholarships to students who want to enroll at the Yavapai College Viticulture & Enology programs.

Q. Is the Foundation looking for new members?

We recently added several new board members, but would consider others who are interested. We currently have four officers and three members.