Raise Your Glass to Arizona Wine: Meet Our Participating Wineries

Join us in raising a glass to toast these remarkable winemakers and brewers who are committed to sharing their passion with the rest of us! We’re proud to have them, and we can’t wait for you to taste the fruits of their labor. 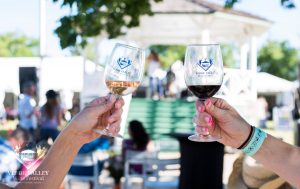 Arizona boasts more than 120 wineries and tasting rooms across the state, according to the Arizona Department of Travel and Tourism. Arizona wine tourism industry generated about $56.2 million in economic output in 2017 alone, has created hundreds of good jobs across the state, and helped give a boost to other industries, such as hospitality.

The Verde Valley Wine Festival aims to celebrate and showcase Arizona’s best vintners. Attendees of our event appreciate the ability to sample wines from all of Arizona’s three winemaking regions: the Verde Valley, Sonoita, and Willcox. 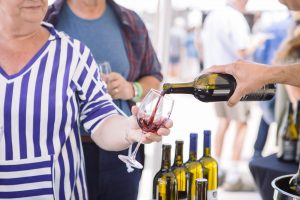 This year’s festival is even more special, because in November 2021, the Federal Alcohol and Tobacco Tax and Trade Bureau (TTB) designated the Verde Valley as an official American Viticultural Area (AVA). This means that the Verde Valley has officially joined Willcox and Sonoita as a recognized AVA. The Verde Valley is home to 19 commercial vineyards and 25 tasting rooms, according to the Verde Valley Wine Trail. More than 40 different varietals are grown in the region, and the locally-owned tasting rooms give wine lovers a chance to try different types of locally produced wine, including Chardonnay, Vermentino, Syrah, Petite Sirah, Cabernet Sauvignon and Sangiovese.

Becoming a designated AVA is a long process—in this case, more than four years in the making. It required a massive effort on the part of people and groups who are deeply invested in the success of Arizona winemaking. The Verde Valley AVA petition was submitted to the TTB by the Verde Valley Wine Consortium in 2017. Multiple grassroots organizations, including the Arizona Wine Growers Association (a co-host of this year’s festival) and the Southwest Wine Center at Yavapai College worked tirelessly to support the Consortium’s position.

The winemakers who have been selected to pour at the Verde Valley Wine Festival hail from all three AVAs and represent the best in family-owned, small-batch winemaking. This year’s wineries are:

They will be joined by local craft breweries, distilleries, culinary-driven food truck concepts, restaurants, and artisans to celebrate Arizona’s winemaking economy and the culture built around it. Breweries and distilleries include:

Details on VVWF: Who, What, When

The Verde Valley Wine Festival will be held on Saturday, April 30 from 12 p.m. to 5 p.m. (General Admission) at the Old Town Activity Park, located at 187 E Pima St. in Old Town Cottonwood, Arizona. Tickets are available at verdevalleywinefestival.com. General admission tickets are $35 in advance, $45 at the event. General admission ticket includes 8 libation tastes and unlimited food sampling. VIP tickets are $125 and give you earlier access to the festival (11 a.m. instead of 12 p.m.), access to our chill VIP lounge, 2 additional wine tastings, unlimited food samples, and a swag bag full of keepsakes and samples from local businesses.

VIP Platinum tickets include access to our April 29 pre-festival culinary experience and live auction the night before the main event. The exclusive event will be held at the newly remodeled Cottonwood Community Clubhouse in Old Town Cottonwood. From 6 to 9 p.m., ticket holders will enjoy live music from Phoenix-based jazz band What’s The Big Idea and bites by Merkin Vineyards Tasting Room and Osteria’s Executive Chef Chris “Smithers” Smith.

After dinner, get ready to bid on incredible, one-of-a-kind items and experiences. The live auction will offer local goods and packages up for bid, with the proceeds benefiting the Arizona Vignerons Alliance, a nonprofit organization dedicated to forging winemaking quality standards across the state, and Arizona Wine Growers Association, a nonprofit that advocates for growth, change, opportunities and strength in all aspects of wine growing, making, selling and drinking